Watch for Snakes this Spring 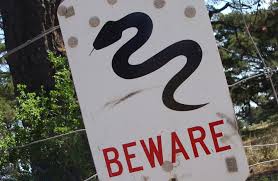 Arizona spring weather is some of the most anticipated seasons of the year for many residents and out of town visitors. Everything from camping in Arizona to various outdoor festivals and events are available for everyone to enjoy valley-wide. But the rise of temperature also awakens the rise of something else; snake bites. In fact the spike in snake bites has become a rite of late spring, according to hospital officials at Banner University Medical Center Phoenix, the hospital in Maricopa County that specializes in treating snake bites.

Banner Hospital sees about fifty snake-bite patients a year, the most in the Southwest, according to Dr. Frank Lovecchio, co-medical director of Banner Poison and Drug Information Center. Last month the hospital cared for ten snake-bite patients in a single month. “And there could be more before the month's end,” Lovecchio stated, “because the number of snake-bite reports increases this time every year, as temperatures creep toward ninety degrees.”

"When snakes sense a little bit of heat and humidity, they come out," Lovecchio said. "The snakes are hibernating most of the year and now they are starting to come out. It’s important for Arizona residents to be aware of snakes this spring. Suggested tips include:

• If you come across a rattlesnake, observe its beauty from a distance and let the snake go on its way.
• From a coiled position, a rattlesnake can strike at a distance of about half to two-thirds of its body length, so you do not want to get too close.
• Rattlesnakes are most active in the evening and a night when they do most of their hunting. They are usually very active in the early spring after remaining inactive during the winter months.
• It's best not to hike in wilderness areas after dark. Carry a walking stick and keep it forward to let snakes know you are approaching their area.
• If you hear the "rattle," freeze. Look carefully to locate the rattlesnake and move slowly in the opposite direction.

If you happen to see a rattlesnake on your property, call a local agency that can help remove the reptile. If you are bitten by a rattlesnake get to an emergency room right away or call the national network of poison-control centers immediately at 800-222-1222 if you are quite a distance away. Stay safe this spring and please be aware of snakes!