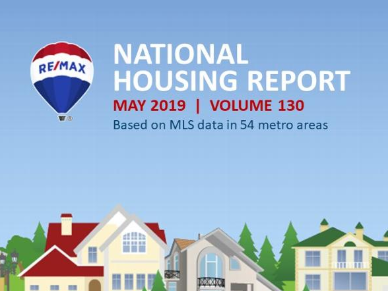 May home sales ticked slightly higher year-over-year, ending a 9-month streak of declines, according to the RE/MAX National Housing Report. At the same time, inventory grew for the eighth consecutive month, representing the most units for sale since August 2016 in the report’s 54 metro areas.

Homes sold quickly, as evident in the Days on Market average of 47 – the second-fastest May average in the 10-year history of the report. And home sales increased 15.3% from April to May – the second-highest April-May jump in report history.

“The spring selling season was in full bloom during the month of May, offering both buyers and sellers something to like,” said RE/MAX CEO Adam Contos. “Buyers are generally finding increased selection along with moderating price increases. At the same time, in general, sellers are selling their homes quickly while still enjoying some price gains. Bottom line, the market is operating efficiently right now, and homes are selling, on average, at a good clip.”

Contact me or my team for more information on the market status and we will be glad to help you!